It's time for the 5th instalment of my Alexa Top 1 Million scan and this time around there's another new metric in the data.

I've done 4 previous crawls before now and they were Aug 2015, Feb 2016, Aug 2016 and Feb 2017. I'm also publishing my daily crawl data which is available here for further analysis by the community. Let's dig into the latest data!

To start off with the good news, things are continuing to get better!

One of the biggest changes since the last scan has to be the enormous jump in the number of sites deploying HPKP. This is rather interesting for many reasons, not least because just last week I announced that I'm giving up on HPKP...


The increase in HPKP is almost entirely caused by Tumblr deploying HPKP across their entire catalogue of sites. Whilst the number of their sites in the top 1 million has changed since I first noticed this, there's still a huge jump of over 3,000 sites. Another big win in the scan this time around is the continued growth of the deployment of HTTPS. We're really seeing a continuation of the awesome progress being made here and this was confirmed by Adrienne Porter Felt and April King recently in their talk 'Measuring HTTPS Adoption on the Web' at USENIX (slides). 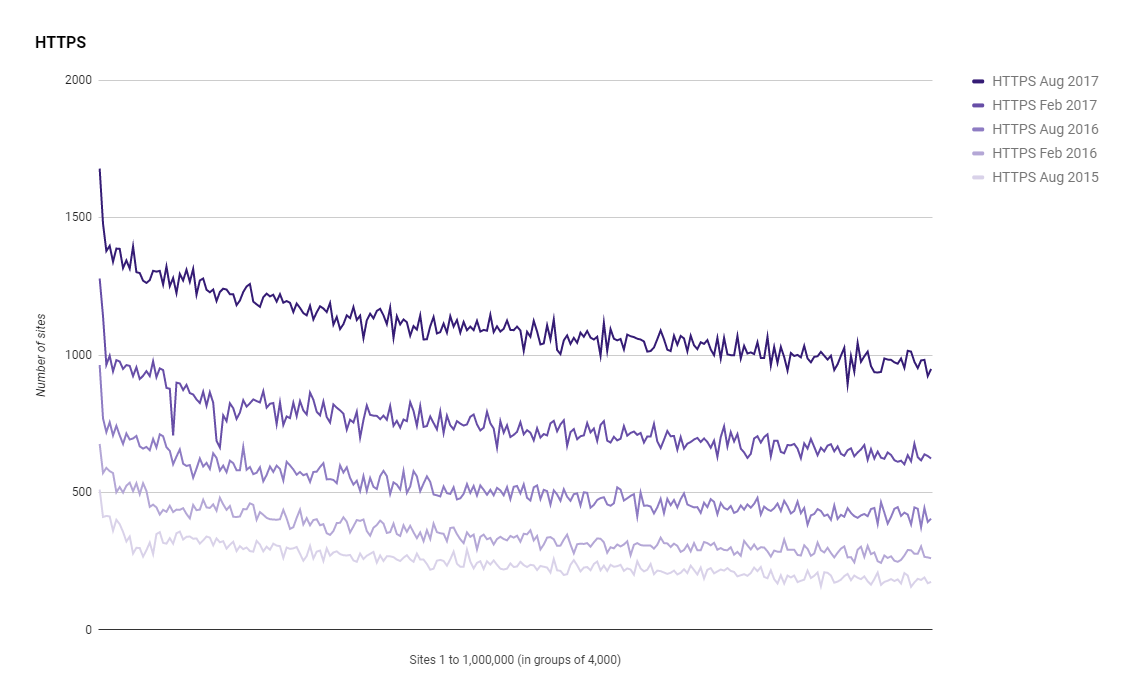 We can clearly see there's huge progress each time I conduct these scans on just how fast HTTPS is being deployed across the web but another thing that's really important is that not only is adoption continuing, it's accelerating. I've noticed this increase in the rate of adoption in previous scans and I'm really excited to see it again. 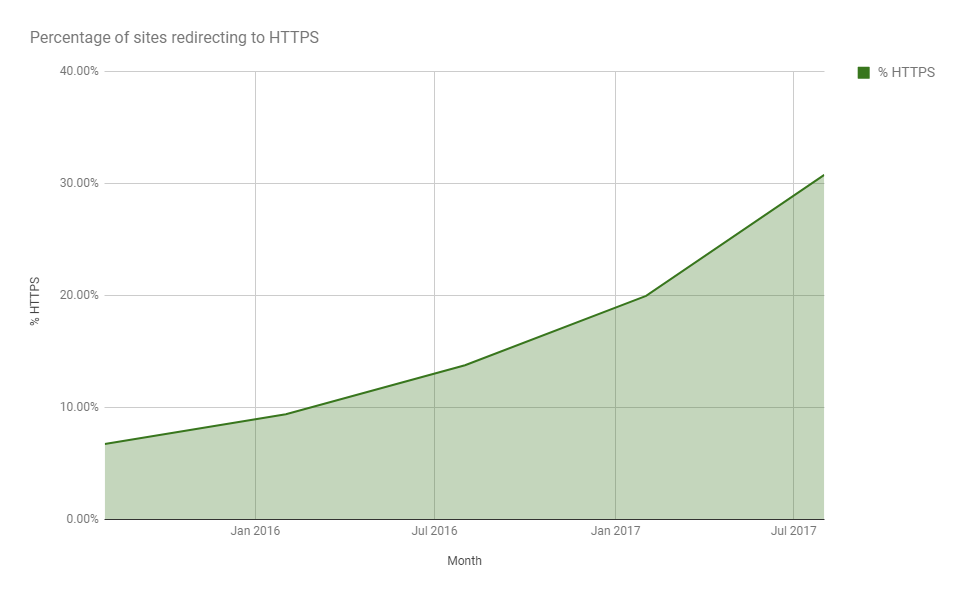 One of the original purposes of my scans was to determine the adoption of various HTTP security headers and I'm still tracking good progress in that area too. We've seen increases in usage across the board and some of them are quite significant. I'd like to think that securityheaders.io is at least helping to drive adoption and education about these headers. 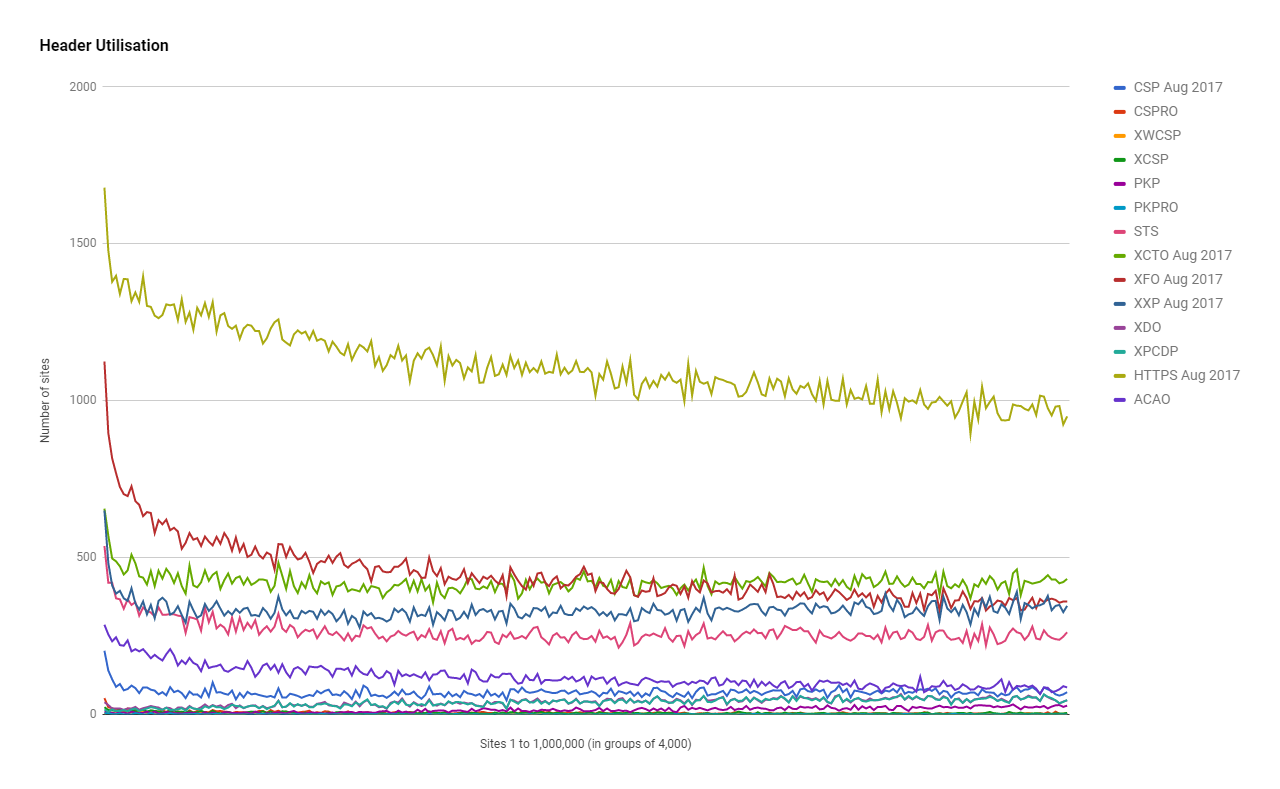 What's really odd is that the trend for XXP and XCTO are still there! The presence of all other headers decreases as you go down the ranking except these two and still to this day there isn't a solid explanation for this. As I mentioned above the raw data from my daily scans is available so please do dig into the data and see if you can identify why this trend exists.

I've now been tracking the adoption of Let's Encrypt over 18 months and they too have seen some great progress in their adoption in the Alexa Top 1 Million. 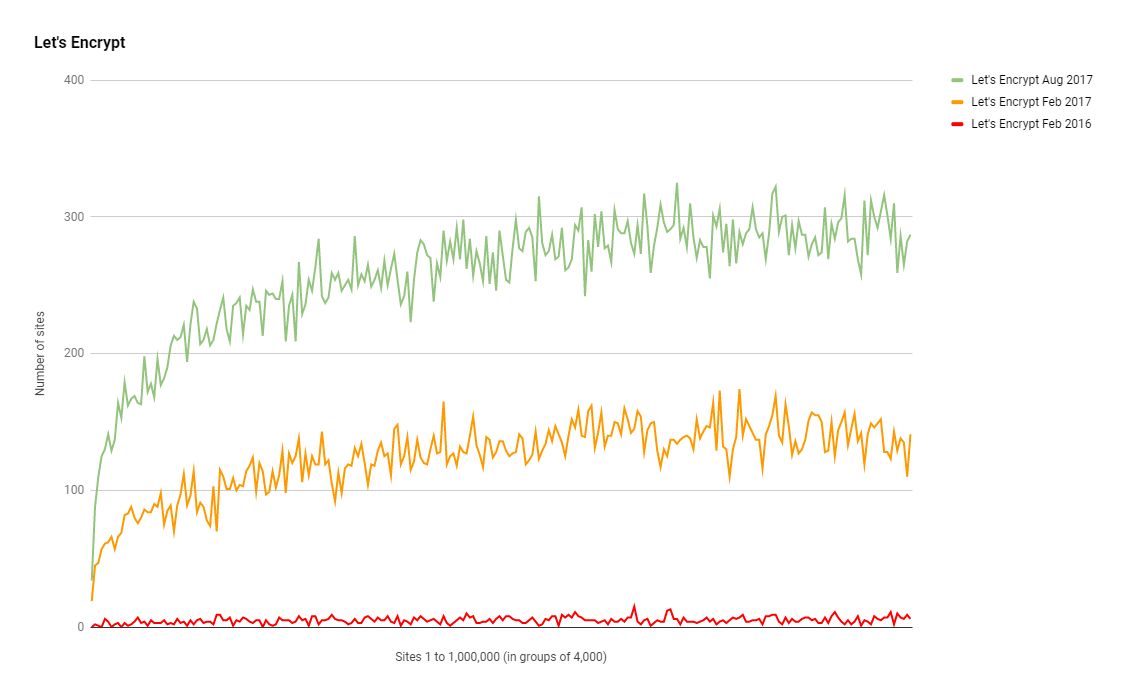 The low usage in the very top ranked sites is still present but across the rest of the ranking they've seen significant growth. My guess is that sites right near the top probably have established commercial agreements with a CA but we may see them shifting over time, albeit more slowly. 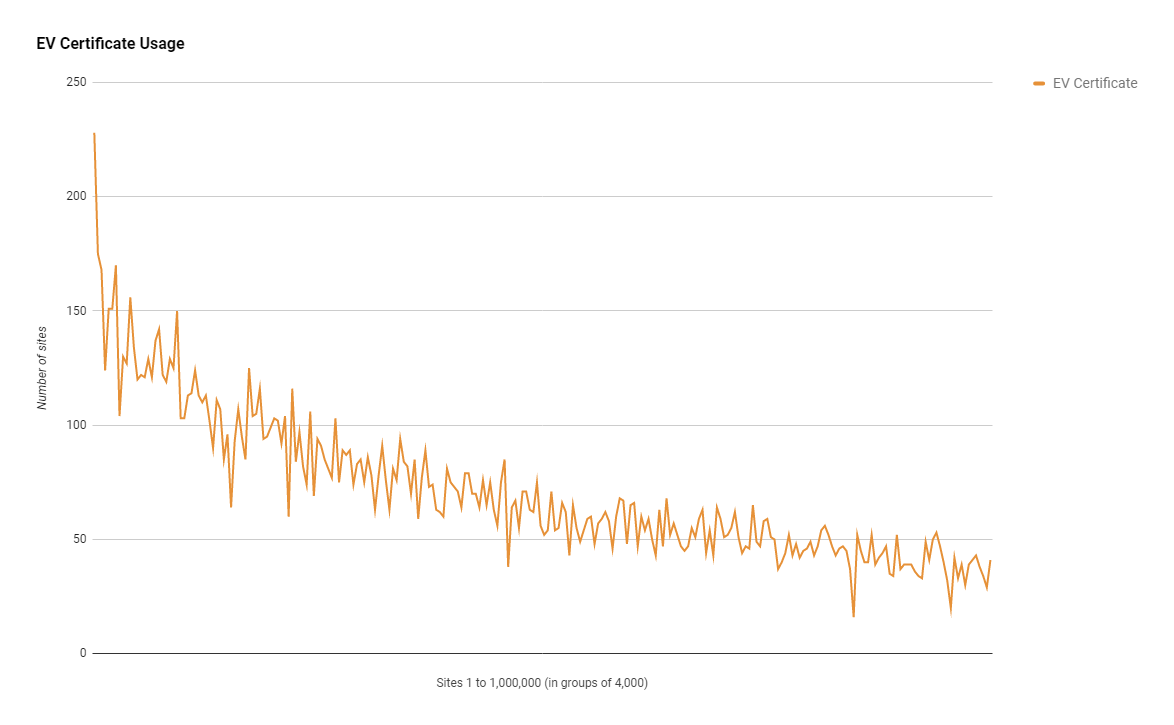 As you can see the usage of EV certs is much higher in the higher ranked sites and tails off much in the same way that most other metrics do. I'm sure there will be various arguments for why this is the case but my guess is that sites near the top have a higher budget so the cost of EV is less significant to them and worth a shot for any potential benefits.

You should check over the raw data that I make available if you want to dig into specifics but this is a nice overview of a few of the stats that my crawlers now collect.

There are a few other nice things that I've noticed whilst looking over the data here that I think are worth pointing out.

The last few things to quickly note are that Nginx is closing the gap on Apache as the most popular server choice, Cloudflare have seen a significant increase in their presence and this is the first report where no sites in the top 1 million negotiated SSLv3 with my crawler!

As always the raw data from my scans is available here.

By making the raw data available I'm hoping that others will be able to conduct further analysis or use it to further their own research. I dump the data from the crawlers every day so there's a lot to go at!

You can also view the Google Sheet with all of the data and graphs I've used throughout this article and all of my previous articles here.

I will be sending a few tweets with other bits of information that I've found and embedding them below.


Very soon @letsencrypt will be the largest issuing CA for the top 1 million sites on the web 😎 https://t.co/i9byJj2mR5 pic.twitter.com/mXXHWXjUe6

I recently changed my Ghost hosting setup just a little to harness a couple of benefits of Ghost(Pro) but still keep some of the levels of control that I... 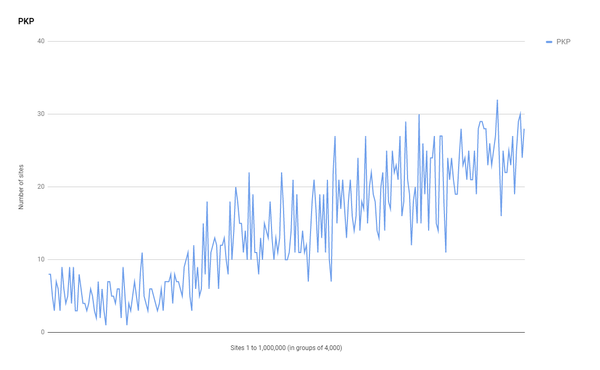 HTTP Public Key Pinning is a very powerful standard that allows a host to instruct a browser to only accept certain public keys when communicating with it for a given...